To put it briefly, an extended chord has a number attached to its name that is GREATER than 7.  These come in the form of 9th, 11th, and 13th chords.  They’re common in jazz–in fact they practically define the sound of jazz–but you see them here and there in rock and blues too.

The concept of these chords is, literally, an extension of the concepts covered in the lessons on triads and 7th chords.  The pattern of building a chord in thirds (starting on the 1st note of a scale, skipping to the 3rd, the 5th, etc.) continues into the 2nd octave of the scale.  If you write out two octaves of a scale, and number them all the way through, it looks like this:

The notes we’re going to concern ourselves with are the 9th, 11th, and 13th.  We don’t deal with the 8th, 10th, and 12th steps of the scale because these are the same as the root, 3rd, and 5th respectively–they’re already there.

To create our extended chords, we start with the main families of 7th chords (major 7, minor 7, and dominant 7), and simply start stacking 9ths, 11ths, and 13ths on top of them.  These extensions don’t really change the function of the chords–they just add some different colors to the chords.

Wait…how do we fit all of these notes into a chord on the guitar?

To simplify the chords even further, other notes can be dropped.  The 5th is usually the first to go, as it is generally considered not to add any special character or essential function to the chord.  And believe it or not, the root can very often be dropped, especially when playing with a full band where the bass player would have the root covered.  When I’m practicing these chords on my own, though, I like to hear the root.

Really, the most important notes of any chord are the 3rd and 7th.  These are known as “guide tones”.  Many voicings of extended chords include nothing more than the root, 3rd, 7th, and the extension.  This is enough to create the sound of the chord.  In fact, if you try to fit too many notes into a chord like this, the chord tends to sound cluttered or muddy.  Less is more!

SYMBOL:  These are sometimes symbolized (especially by jazz musicians) with the “triangle” or “delta” symbol, as in C△9 and C△13.

CONSTRUCTION: You start with a maj7 chord (1-3-5-7) and tack on the 9th and/or 13th.  Typically, only ONE of these is added to the maj7 chord to make the extension, although the other notes are fair game too and can be included in the chord–especially by piano players, since they have 10 fingers to work with.  But for us guitarists, one extension is all that’s necessary.

USAGE: If a song calls for a maj7 chord, try replacing it with a maj9 or maj13 (this is what is known as “chord substitution”).  It may or may not be the sound you’re looking for at a given moment but give it a shot.

EXAMPLES: Here are a couple of common fingerings for extended major chords (note where the root (1) is placed, and use that to move the chord around the fretboard: 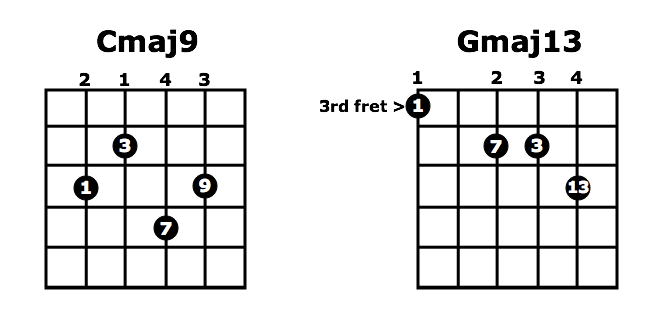 SYMBOL: Sometimes a “minus” sign is used (especially by jazz musicians) to indicate minor, which gives you C-9, C-11, C-13.

EXAMPLES:  Here are some common fingerings of extended minor chords.  Learn where the root note is so that you can move it around the fretboard.

CONSTRUCTION: Dominant chords may actually be the most common extended chords (though that’s not actually why they’re called ‘dominant’).  The base of these chords is the dominant 7 chord (1-3-5-b7).  Those 7th chords you probably already know, such as A7, E7, etc., are dominant 7th chords–The extension is added (again, usually only one extension at a time), resulting in C9, C11, and C13 chords.

Here are some common fingerings for extended dominant chords:

The last thing I want to cover briefly is what jazz musicians call “altered chords.”  To go into detail about these chords and how they are used is really beyond the scope of this website, as it really does take you into the land of jazz (and as soon as I figure out how to play jazz, I’ll start a jazz website).  But the naming of these chords is simple enough.  The 9th can be raised or lowered by 1/2 step to create a #9 or b9.  The 11th can be raised 1/2 step to create a #11, and the 13th can be lowered 1/2 step to create a b13.  Most of the time, these alterations are tacked onto dominant 7 chords, and usually the alterations are notated in parentheses, resulting in chord names like E7(#9), Bb13(#11), or even Bb7(b9b13).

The main thing to realize about these types of chords is that they almost tell you more about what NOT to play, than what you should actually play.  If a chord calls for a #9, it’s not 100% essential that you play a #9 in the chord–it’s mostly essential that you DON’T play a natural 9 in the chord.  Very often it’s because that 9th might clash with a melody note in the song.  This tends to be an issue in jazz more than rock/blues/funk.

Most rock guitar players have run across the dominant 7 (#9) chord in Jimi Hendrix’s music–the E7(#9) is featured prominently in “Purple Haze.”  Here’s how that chord is played: 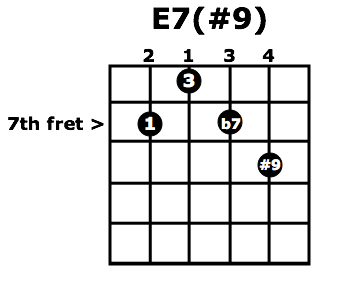 The Lydian mode and #11 chords 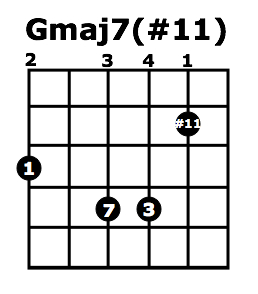